Marvel Studios have announced that, in celebration of the Marvel Cinematic Universe’s 10 year anniversary, the whole, 20-chapter saga is to be re-released in a special series of screenings that will take place from 30th August – 6th September.

Premiered 13th March 2014. Captain America: The Winter Soldier explores Rogers’ adjustment to life in the 2010s. Barnes is revealed to have become the Winter Soldier. Also introduced is Samuel Wilson, AKA Falcon; Pietro Maximoff, AKA Quicksilver, and Wanda Maximoff, AKA Scarlet Witch – all members of the Avengers.

Premiered 13th April 2015. Avengers: Age of Ultron reassembles the Avengers: Stark, Banner, Romanoff, Odinson, Barton and Rogers. Stark comes out of retirement as Iron Man. The Vision is created, sustained by the fourth Infinity Stone: the Mind Stone. Vision joins the Avengers with Rhodes, the Maximoffs and Wilson. After a membership restructuring, the Avengers is reformed into the New Avengers: Rogers, Romanoff, Rhodes, Vision, Wilson and Wanda Maximoff. Odinson realises the significance of the Infinity Stones and begins a journey to discover more about them. Thanos acquires the Infinity Gauntlet.

Premiered 23rd April 2018. Avengers: Infinity War is the climax of the Marvel Cinematic Universe metanarrative. Thanos collects all the Infinity Stones in the Infinity Gauntlet in a chain of events that unites the former Avengers with the Guardians of the Galaxy – who also disband – and culminates in the Infinity Gauntlet fulfilling its purpose of eliminating half of all life from the Marvel Cinematic Universe. The location of the Soul Stone is revealed. Parker, Vision, Wanda Maximoff, Wilson, Strange, Quill, Mantis, Drax, Raccoon, Gamora, Groot Jr., T’Challa and Barnes die. Avengers: Infinity War holds the worldwide and domestic box office record for highest-grossing opening weekend and the domestic box office record for highest-grossing Saturday, Sunday, April opening weekend, Spring opening weekend, 3-day opening weekend, opening weekend for a PG-13 rated film and quickest film to make 150, 200 and 250 million dollars.

A selection of the origin stories of the Marvel Cinematic Universe’s heroes:

Iron Man and Doctor Strange are the only conventional origin stories included here (Thor has no secret identity, Lang merely succeeded someone else in the role of Ant-Man and The Incredible Hulk confines the origin story to the opening credits). Spider-Man: Homecoming and Black Panther are not origin stories – Black Panther’s origin was incorporated into Captain America: Civil War, during which Parker is already Spider-Man (his origin has already been told outside the Marvel Cinematic Universe twice). And speaking of Captain America, surely his origin in Captain America: The First Avenger is much more fitting? And even then, there’s only three films there, not four. Personally, I think that the two “theme” days should’ve been excluded, with the festival only running six days instead.

A selection of films depicting the adventures of the Marvel Cinematic Universe’s teams:

Guardians of the Galaxy Vol. 2

Guardians of the Galaxy Vol. 2 is an expansion of a pre-existing team and Captain America: Civil War is the dividing of a team into two factions. Marvel Avengers Assemble is the only film included here in which its members do “team up” and Avengers: Infinity War is a teaming-up of two teams together. Perhaps Guardians of the Galaxy should’ve been included as the middle act of a three-film day, but that would still be one less than the previous days. Again, this calls into question the point of running “themed” days just to lengthen the festival to eight days instead of six. It’s not as if those extra two days are showing any films not included in the others anyway.

A poll conducted by IMAX on Twitter (which has since closed) gave fans the ability to vote for two of four films to be screened on the final day: Iron Man, Captain America: The First Avenger, Marvel Avengers Assemble and Black Panther. After 50, 000 votes, a combined 66% of fans decided that the two films shown on the final day will be

The results make perfect sense. Marvel Avengers Assemble not only proved that the Marvel Cinematic Universe could work as a concept, but also still retains the unique experience of seeing the Avengers assemble for the first time – something that successive Avengers films just couldn’t recapture. Iron Man was also the film that started out the whole sage those 10 years ago, so it’s only right that it should be the one to close out a festival celebrating its endurance a decade later. 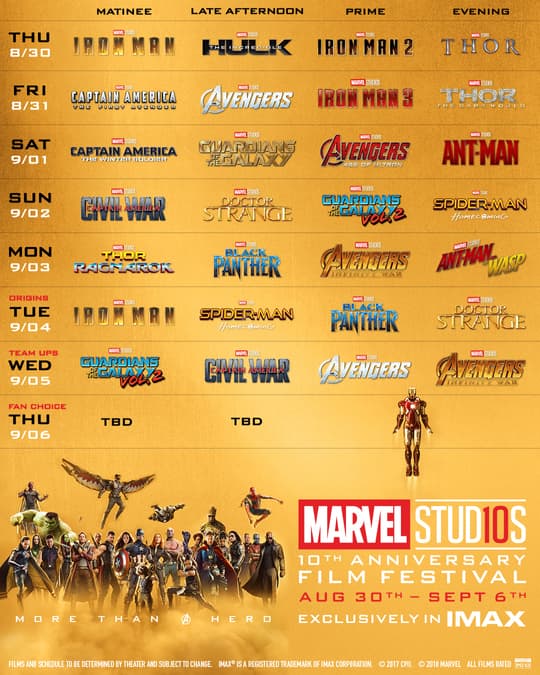