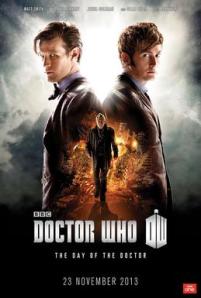 Radio Times are a formerly BBC funded TV listing magazines that have held a special relationship with Doctor Who over the years, not least because the show’s appeared on the cover more than any other show. Every year, the British Academy of Film and Television Arts host two awards ceremonies – one for British film, and one for British television (plus an international category).

One of the awards is the Radio Times Audience Award, which is the only award voted by the public. This year, the fiftieth anniversary special, The Day Of The Doctor, was voted most popular nominee.

Which is odd, frankly. Given the other nominees, Breaking Bad, Broadchurch, Educating Yorkshire, Gogglebox and The Great British Bake Off, were all actual shows, why should Doctor Who only get one episode? Yes, it’s the anniversary special, but a Christmas special and a half-season was broadcast that same year.

I suppose given that The Day Of The Doctor was a special (meaning an episode broadcast outside of a regular season), they were able to nominate that single episode. But it seems every other episode broadcast that year just didn’t do it for them.

Not that I can blame them at all. The Day Of The Doctor was noticeably better than the other episodes of 2013, and was indeed simulcast around the world, becoming a Guinness World Record for the Largest Broadcast of a TV Drama. Even if that weren’t the case, and the rest of the show were nominated, it would have still won. Why? Also simple: BBC One.

Of all the nominees, Doctor Who is the only one to air on BBC One, which has the highest audience share of any British channel. That’s why it gained 16 million viewers where others achieved significantly less. For whatever reason, the majority of people only seem interested in watching something if it’s on BBC One. Which makes any nominees broadcast there more likely to win an audience award.

Which asks the question of: why bother? If it’s more likely to win based on its channel, why should the audience award exist at all? Honestly, it shouldn’t. That’s what separates BAFTA from the National Television Awards and the Oscars from the Golden Globes – committees know best. Unlike most other people, who’ll vote because they’ve only seen one nomination, it’s the responsibility of BAFTA to watch the majority of what’s on television in order to make a legitimate vote. The audience award seems to be a ratings cow, therefore; give the audience one award of their own, and they’ll watch to find out who’ll win (because BBC One really needs that kind of ratings boost). Of course, Doctor Who: The Day Of The Doctor won, because more people saw that, so were more likely to vote given the trend that people only tend to have seen one of the candidates. (Seriously, ask yourself – have you seen all of them? Every one?)

That being said, it did totally deserve to win. It’s just interesting to me that the rest of the show wasn’t nominated by Radio Times or by BAFTA for the Drama award.

But what’s more interesting is that nobody from the BBC expected it to win. Even Producer Faith Penhale (which took some finding, by the way – neither BAFTA or the BBC said who it was and I eventually found it on Kasterborous) said that, had anybody expected it to win, somebody more famous would have collected the award. Not that directors or producers or writers are considered “famous” by the public. And don’t tell me Steven Moffat was in Lanzarote, because he wasn’t. They were filming in the UK on BAFTA night.

Why nobody expected it to win perplexes me, really. It won the National Television Awards – which is voted by the public – yet nobody thought it would win an audience award from a more prestigious organisation on a more popular channel? Maybe there’s something they’re not telling us.
Either way, it totally deserved to win. And I also say that like every other member of the public – having only seen one nomination (this one). With that out of the way, perhaps everyone can stop talking about the fiftieth anniversary now? While the hype was definitely justified at the time of the actual anniversary, we’re six months after it now. Literally half a year later. Hopefully, when Series 8 premieres, everyone will forget about the anniversary because they’ll be so impressed with Peter Capaldi. The anniversary was about honouring the past while looking to the future – and the best way to do that is to now leave even that behind and move on. And let’s hope Series 8 will be better and actually get nominated this time.

See The Day Of The Doctor winning the Radio Times Audience Award here.